Francis’ prayer intention for the month of January

Educate with fraternity: the extra ingredient that Francis is asking of educators in his first Pope Video for 2023

● In the first Pope Video for 2023, Francis emphasizes the importance of educators, as he has done repeatedly during his pontificate.

● The Holy Father asks that they add new content to their teaching: fraternity, a key ingredient in the search for a world that is closer to those who are most vulnerable.

● Francis wants educators to be credible witnesses, who see fraternity as the best path for helping those most in need.

(Vatican City, January 10, 2023) – The Pope Video has just begun its eighth consecutive year by publishing the prayer intention that the Holy Father is entrusting to the entire Catholic Church through the Pope’s Worldwide Prayer Network. To inaugurate 2023, Francis has chosen to send a message to educators with a unique proposal: “add new content to their teaching: fraternity.”

Head, heart and hands: witnesses of fraternity In this Pope Video, Francis wants to broaden the reach of education, so it will not be centred only on content. For the Pope, educators are witnesses of fraternity who not only pass on “their mental knowledge, but also their convictions, their commitment to life.” In this way, educators will be able to be “heeded much more attentively and will be community builders.” “Educating,” the Holy Father said last year in a conversation with a delegation from the Global Researchers Advancing Catholic Education Project, “is taking a risk in the tension between the mind, the heart and the hands: in harmony, to the point of thinking what I feel and do; feeling what I think and do; of doing what I feel and think. It’s a balance.”

A school, a soccer field, a teacher

with the narration of a story which takes place at a school. A boy, marginalized by his classmates during soccer games, stays alone in a corner until a teacher recognizes his plight and decides to help him. He doesn’t do it with words, but with his testimony of life: he stays with him, day after day, and passionately and perseveringly teaches him how to play. This goes on until one morning he finds the boy together with those same classmates who had marginalized him earlier: he’s playing with them, and when he makes his first goal, he dedicates it precisely to that teacher, the credible witness who helped him.

Don’t forget those who are most vulnerable Fr. Frédéric Fornos, S.J., international director of the Pope’s Worldwide Prayer Network, commented on this first prayer intention of 2023: “Once again, in the face of the challenges of the world, Pope Francis insists anew on fraternity. This is the compass of his encyclical Fratelli Tutti. It’s the only path for humanity, and this is why education is essential. The Pope entrusts educators with being ‘credible witnesses’ who can teach fraternity instead of confrontation. When we look at Jesus we learn that we can only communicate and transmit to others what we ourselves live. This requires coherence in our lives between what we say and what we do. This is a grace, and that’s why he invites us to pray to receive it.” 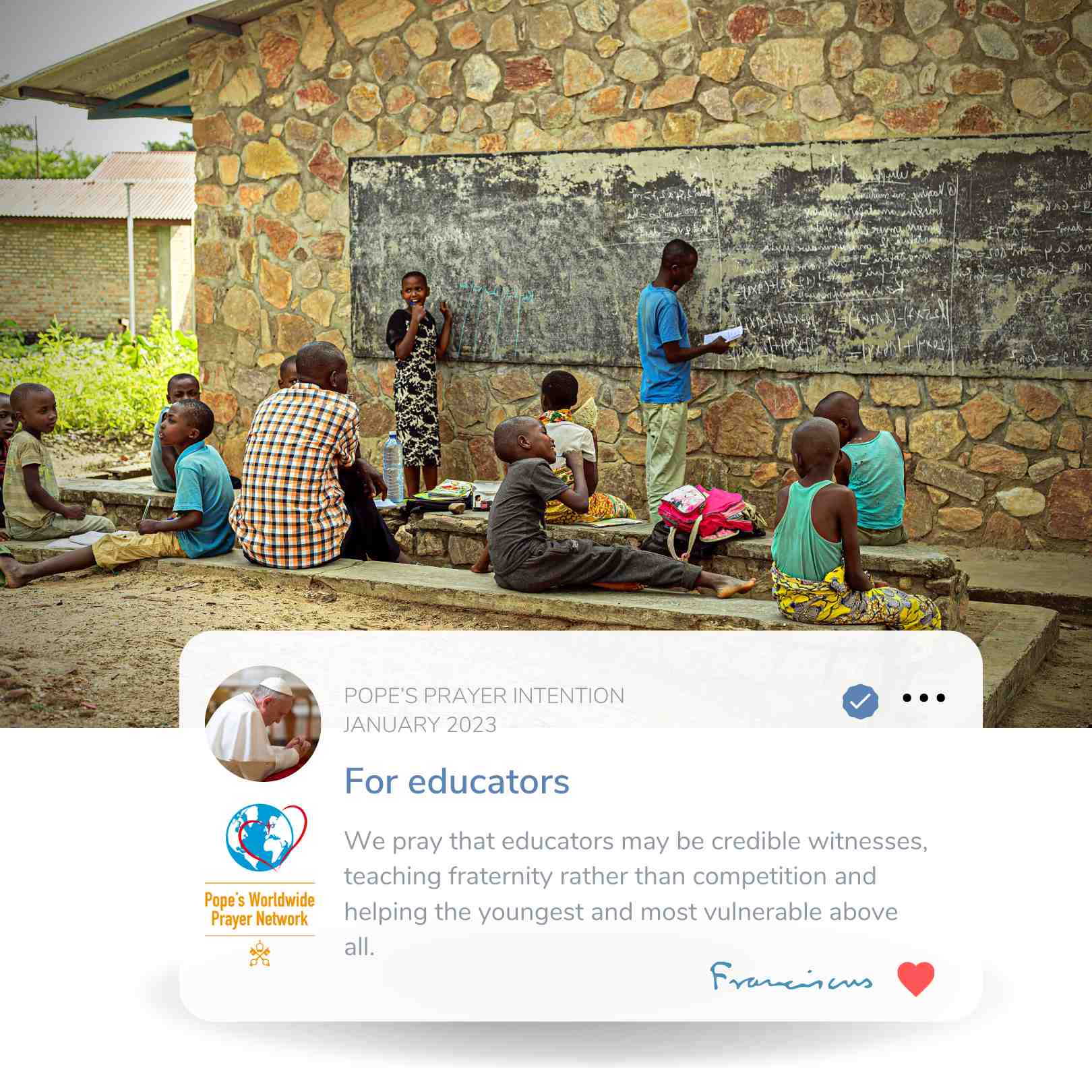